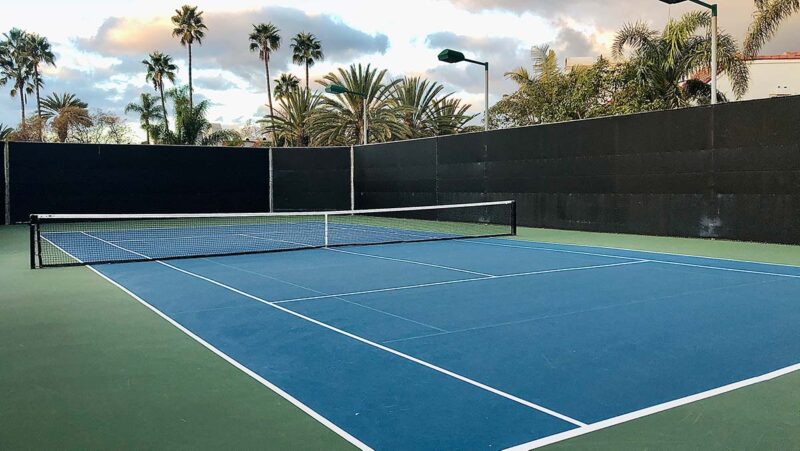 About The Dana Hills Tennis Center

DHTC is a public tennis facility located in Dana Point, California. The construction of this amazing South Orange County public tennis center is unique in character because 6 of the 8 courts are constructed on the top deck of a 7.8 million-gallon water reservoir.

In 1977 board members of the South Coast Water District decided to better utilize land space for water storage and, at the same time, provide a recreational facility that could be used by the community. Both purposes could be accomplished more functionally and aesthetically by building an underground concrete water reservoir in lieu of a steel tank.

In 1978 this issue was brought to the constituents of the SCWD, and they overwhelmingly approved a bond issue for the project. The size of the reservoir structure allows for 6 tennis courts to be built on top. In 1980 the project was completed, and the official plaque christening the facility as Dana Hills Recreational Park was placed on the reservoir.

Then, in 1981, a memorial service was performed by the board members dedicating the facility in the memory of James Van Rensselaer, the water district’s community relations consultant and staunch supporter/contributor to the project.

In July of 1983, the recreational park officially opened. For public awareness, the facility was renamed Dana Hills Tennis Center. DHTC is a nonprofit facility owned and operated by the South Coast Water District. The bond issue that was passed paid the capital costs for the water reservoir, and in turn, the tennis courts.

The tennis center is open to the general public but is not funded by any city, county or state programs. Therefore, fees are charged strictly to the user placing the financial responsibility on them and not the local taxpayers. These fees are the primary source of revenue DHTC uses to operate, properly maintain and upgrade the facility. Any excess funds go directly back into the tennis center fund for further improvements.

In 1987, district board members took the initiative to upgrade the facility due to the expanded growth in Dana Point. Construction of two additional tennis courts along with a 2200 sq. foot two-story clubhouse began in 1988 and the project was completed in January of 1990.

The Dana Hills Tennis Center seeks to provide and promote the opportunity for anyone in our Dana Point and Southern California tennis community to enjoy the game of tennis in a beautiful facility with programs for adults and kids of all ages at an outstanding value while striving for excellence in customer service, and quality.

Our staff is committed to being the best that we can be by working as a team to provide the highest standards of integrity, honesty, and ethics to achieve those goals.